Her purse was full of candy 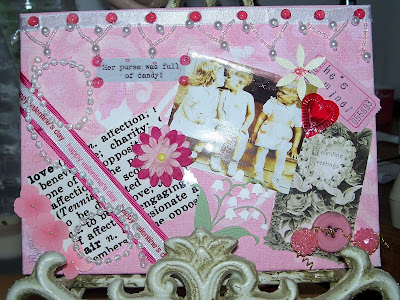 I received a collage sheet from Patty over at http://www.lisasalteredart.com/ and on the sheet were tons of sayings. This saying really was just too cute not to do something with it. I found this image of the three little wee ones on my computer hard drive ( over 30 thousand images) and it hit me. *****The little wee one on the left well, that was my sister Toni and the little wee one on the right well that's me and the little wee one in the center well that is Tommy. Tommy was the cutest little boy you have ever seen. I had such a wee little crush on Tommy and Toni knew it. She had went into our Mother's purse and pulled out some hard candy and was tempting Tommy with it. Every time Tommy would kiss Toni she would give him another piece of candy. She had tucked them into a little bag our Mother gave her. Toni knew that was the only way she could get Tommy to kiss her. She was always the little sister pest. Good thing she grew up to be who she is today and that Tommy married Sally down the street. They had seven kids and he is a gambler in sin city ********
Thus the collage Her Purse was Full of Candy.
Now this collage has been shipped to a wonderful fellow blogger that I have never met but her kindness took my breath away. I posted that I was in desperate need of a Tiffany's Blue Box ( I had no idea that Tiffany's would not sell me a blue box) Beckie from http://www.artbeckons.blogspot.com/ came through with the box. So, Beckie this is yours.
************ The story well, I totally made that up************* This is a found image on the Internet. Google is a wonderful thing.
Shared by Veronica

Sounds like me, no doubt, except you've got one little detail wrong -- I wanted to try out kissing, yea, true story, but after the first one, I was giving that boy candy cuz he had breath that could take out a rhino! oofda! Sally down the Street can have him!

LOL!!! THat story is so funny! Toni's comment is even funnier! Oh, that photo is precious and so is the collage! :)

That is so cute i love how you found a random picture and put a believable story with it!

Hello there cutie! I love your new piece of art. I am hoping to update my blog soon, and add some new art. Your whole blog looks just beautiful!

Im a huge fan of the little wee ones I have them all over my bedroom....like all of your works of art I love this one too!!!!

It's here! And it's so cute! I absolutely love it... thank you sooooooooo very much =) I will give it a place of honor in my studio.