We had to drive down and see the house that was in the movie nights in rodanthe. 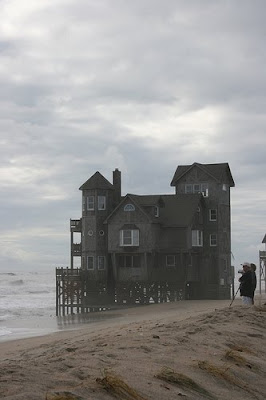 We had a blast the picture above was taken by someone else here but the pictures below were all ours. As you can see above the hosue was ready to be taken in by the sea. Such a shame. The house is called Serendipity. Most of the houses in the OBX have darling names. 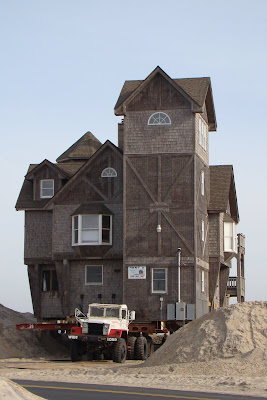 This is Serendipity now. She has been lifted from her moorings and will be moved down the beach to an area where she will not be taken by the sea 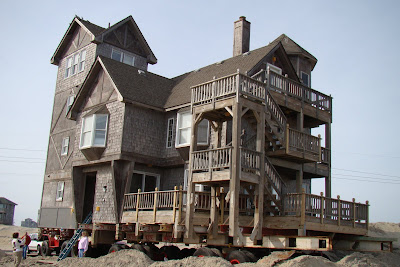 Just look at the tourists. It was a major major deal today to watch them get it ready for the big move. 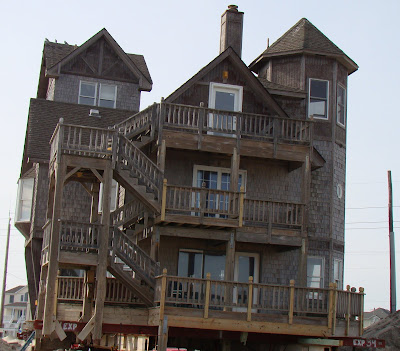 Rick took these amazing pictures of the house on the move. I just get chills knowing that in just six weeks Rick and I will be moving to the OBX. We found our house and yes it is on the water.
We are on the sound side and I have pictures to post of the house in another post.
We are beyond ourselves with such happiness. There are a million worse places to live than the outer banks that is for sure. I have NEVER in all my years and I have traveled the world met such friendly people.
You stop for gas and you have a new friend. True Story: We stopped for gas and Rick was pumping the gas and I am telling you new friend. The gentleman pumping gas next to Rick gave him a card, suggestions for eating etc.
Realtors Wow:::: Let me just say OBX has the friendliest Realtors too.
Restaurants? Tons but most close down for the season we did however find several that were open and once again friendly friendly people.
Rick made a comment a few years ago..... He said wouldn't it be great to move to a place where everyone knew your name? Where you have someone you know on every corner. Where a neighbor is truly a friend?
Well, I think we found the place....OBX here we come!!! and we can't wait

Hey, where are they going with my house? hee hee When we lived in NC we used to dream of a house like this on the water! My inlaw's place was 3 rows back from the water and fast becoming beach front due to the errosion!